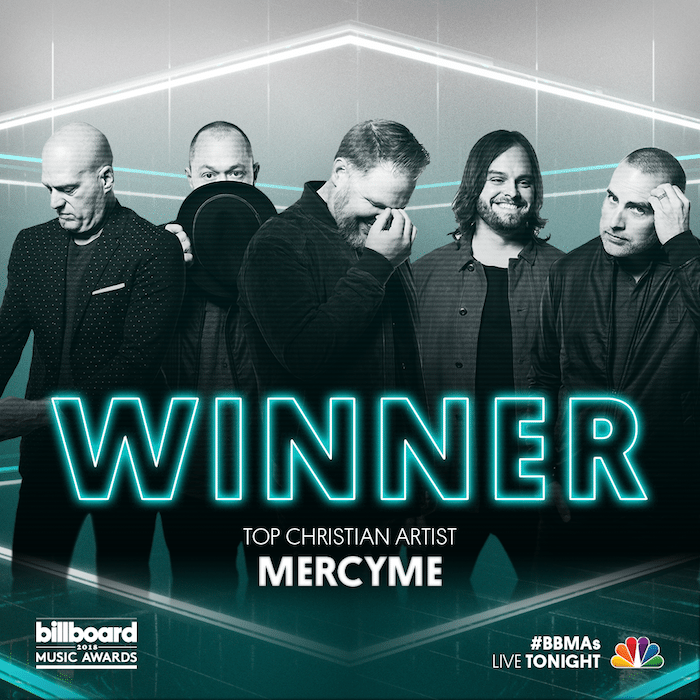 MercyMe?earned a?Top Christian Artist?win at last night?s?2018 Billboard Music Awards! The top honor marks the first win for the band who has garnered a dozen BBMA nods throughout the course of their career thus far. Additionally, the multi-platinum selling band eclipsed all categories for their genre at this year?s show with recognition in the Top Christian Album (LIFER) and Top Christian Song (?Even If?) categories.?

?We never set out to write, make music & tour for an award, but to have Billboard send this honor our way means a great deal to us,? shares the band. ?It has been unreal to see the Lord use the power of music and stories to permeate lives. Thank you to Billboard for being so kind to us throughout our career, especially with this award, and thank you to the fans for sharing in this journey with us.?

MercyMe is a top nominee at the upcoming fan-voted 2018 K-LOVE Fan Awards with four nominations including Film Impact (for the widely successful blockbuster?I Can Only Imagine), Group or Duo of the Year, Song of the Year (?Even If?) and Artist of the Year. The super group will also perform on the show, noting a special performance with Trace Adkins. The 2018?K-LOVE?Fan?Awards will take place on?Sun., May 27, capping a weekend full of rare experiences for listeners. Marking the show?s first appearance on television, TBN will broadcast the 2018?K-LOVE?FanAwards on?Thurs., May 31 at 8 p.m. ET.?

?Grace Got You? Feat. John Reuben is the latest MercyMe single to resonate at radio, currently charting in the top 10 at AC Monitored, Christian Airplay and AC Indicator along with top 20 at Hot AC.

It continues to be a landmark year for the current GMA Dove Award titled ?Artist Of The Year.? A major motion picture based on the life of frontman Bart Millard who wrote the mega-hit song ?”I Can Only Imagine? after the loss of his father opened at a remarkable No. 3 at the box office on Mar. 16, 2018 (Lionsgate, Roadside Attractions). Carrying the same name, Millard?s first memoir released last month.?I Can Only Imagine ? The Very Best Of?MercyMe?is available now. MercyMe was recently named Top Christian Artist at the 2018 Billboard Music Awards. The group is a top nominee at the upcoming fan-fueled K-LOVE Fan Awards with four nominations.?